Your VCR is but a useless box of bits-and-pieces without a tape. It is on this media that your expensive video recorder relies to record and playback pictures and sound. But what's inside your VCR tape and how does it work? Magnetically speaking, all home format video cassettes are very similar. It is in their mechanics that they differ greatly. None more so than the Philips VCR cassette.

The picture below shows the Philips VCR cassette alongside other formats. The most striking difference between the VCR cassette and the other cassettes is that it appears at first glance only to have one spool. It has of course got two, but the supply spool is mounted below the take-up spool. This type of cassette is known as a co-axial format cassette. The other 3 cassettes all have their spools mounted in the traditional co-planar format. That is to say that the spools are next door to one another.

There is another more subtle mechanical difference between the VCR cassette and the other formats. This is the fact that there are two flaps on the VCR cassette instead of only one on the other formats. The main flap on the front opens to reveal a slant of tape - This is where the lacing mechanism picks up the tape. (More on that in a moment.) There is also a slide-door on the right hand side of the cassette. This opens to reveal an area of tape which is read by the audio / control head. This is also the location that the pinch roller and capstan use to drive the tape.

At first glance, it would appear to be impossible for a tape with two spools mounted on top of one another to ever work. How does the tape get from the bottom spool to the top? If we look at the next picture, it makes it slightly easier to understand, but one might still imagine that it would damage the tape if it were ever to try and move. Well, yes it would if you tried to turn one of the spools with the tape in this state.

Looking at the front of a VCR cassette with the flap open.

The reason that the tape isn't damaged when in use, is in the fact that when the VCR is switched on, before any tape transport takes place (Play, FF, REW etc.), a length of tape is pulled out of the cassette and dragged round the video head drum very accurately by a set of posts and poles. This length of tape that is now inside the machine, effectively reduces the angle of the tape from the bottom to the top of the cassette to a very small degree; in fact an angle entirely tolerable by the cassette and the tape. This also explains why the tape must be laced up inside the machine during FF and REW modes whereas with a co-planar cassette such as VHS, the tape can remain inside the cassette.

Inside the VCR cassette there are several rollers and guides. Two of these are visible in the previous picture. These rollers guide the tape as it leaves and enters the cassette.

The next image shows how the tape is arranged inside a VCR cassette. During play and FF, the tape is taken from the supply spool (Bottom) and is wound on to the take-up spool (Top). Notice the serrated edges of the spools. These edges, along with a spring-loaded mechanism in the back left-hand corner of the cassette, stop the spools from turning when the cassette is not loaded into the VCR. 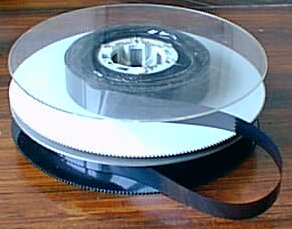 Inside the VCR cassette.

Most of the usual manufacturers made tapes for the VCR, these included Philips, Grundig, Agfa, BASF and Scotch (3M). There was even a VCR cleaning cassette manufactured by Philips which made so much noise as it went through, it sounded like it was sanding metal. The cleaning cassette wasn't very kind to the VCR, and if your machine had tired belts or motors, then often the head drum would stop spinning altogether or the capstan couldn't pull it through and the machine would go into an emergency stop routine. 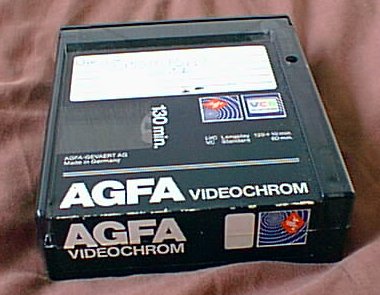 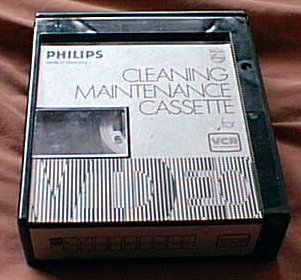 Back to the VCR Page