When the TV Museum is finally in it's new premises in Devon, these sets will all be on display properly. At the moment a lot of the sets are in storage, however, if you would like to see any of them in the flesh in Solihull, UK or if you have a pre 1970 colour set for sale, please email me at mike@tvmuseum.co.uk.

Click on the Quick-Links below to find a particular TV.

This first set is a Baird Dual-Standard colour set model M701. There were several different sets in the 700 range and the 701 was the most basic. The only real difference was the style of cabinet. The 702 and 703 models had folding doors, the 704 model was a larger unit with small compartments at the sides of the cabinet, and the 707 had an integrated Hi-Fi unit. All the 700 and 710 series Baird sets are fairly hard to find, but the 704 and 707 models are the rarest of all. This set was bought from an excellent chap near Stratford on Avon. When I first bought the set it had a diode fitted the wrong way round in the decoder which was letting chroma information through the burst gate and upsetting pictures with a high level of saturation. Now this and a few other minor problems have been sorted out, the set gives a very good picture. Shame about the 'text lines at the top - does anyone know a cure for this? 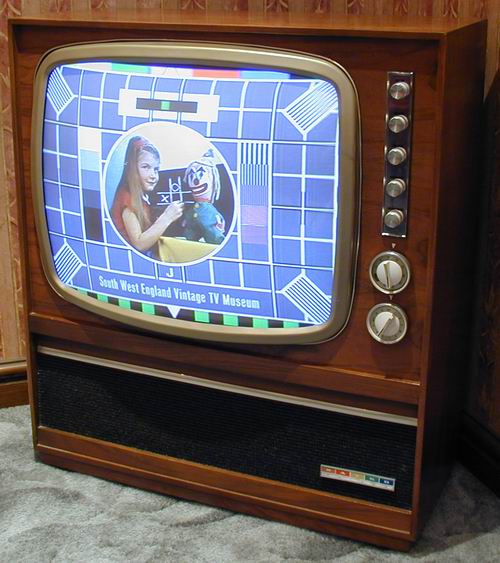 This next award-winning* television is a Dual Standard Baird model M702 and belongs to Steve Pendlebury from Bolton. The set is all but identical to the Baird model M701 above. *This set held the coveted "Oldest working TV in Macclesfield" award. (Awarded to its previous owner.) 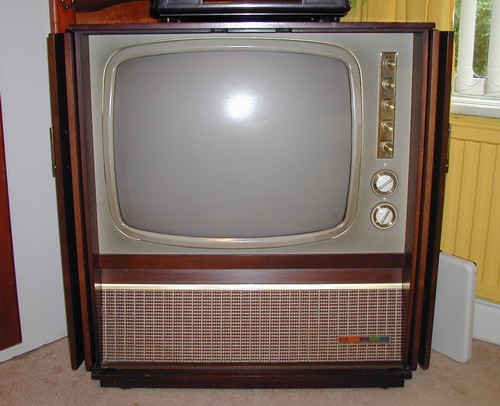 The next Baird TV is a very similar set to Steve's set above. It is a 19" dual standard Baird model 718. It features a slightly different version of the chassis to the older Baird model 701. This particular set had a line drive fault initially but still requires a new frame output transformer and a CRT bezel. If anyone has either for sale, I would be very pleased to hear from them. :-) The set came from an excellent chap called Mat in Selsey, Sussex who fished it out of a skip. The set now belongs to a mate in St. Albans but still requires a new frame output transformer and bezel. 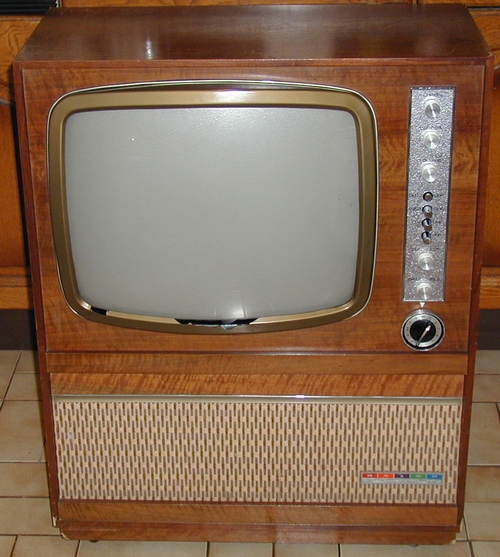 Here is a 25" Decca model CTV25 Prestomatic Dual-Standard set. Actually, "Prestomatic" purely refers to the specific type of UHF / VHF tuner arrangement that the set employs. This set uses the first generation Decca hybrid chassis, but requires a line-output transformer to get it going again. If anyone has one for sale, I would love to hear from them. :-) 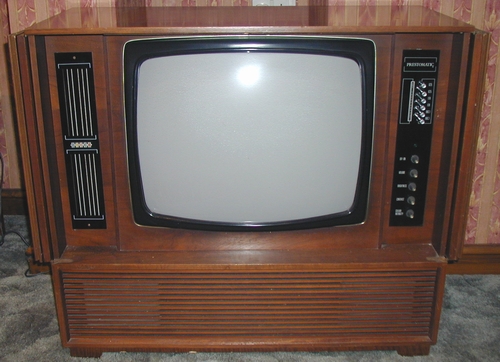 Next, a 1967 Ekco CT102. This is a first generation dual standard colour set which is virtually identical to the Pye CT70. This set was bought from a very nice chap called John from a village to the west of London. Some time ago, the dual standard chassis had been removed and replaced with a single standard chassis because of a line output transformer failure. Luckily, the original panels had been kept safely, and are now back in the set awaiting a Lopty transplant. 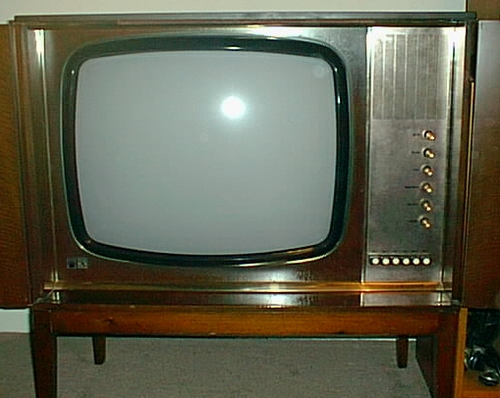 The next set is a Ferguson 3703 which uses the Thorn 3000 chassis. This set was bought from an excellent chap called Keith from Bradford. It has a reasonable tube but it needed quite a lot of work to get it going. I suspect I paid rather over the odds for it, but it has quite a nice cabinet.

Here is a 19" GEC model 2028. It is pretty much identical to it's bigger brother, the 25" model 2030, except that it has a 19" tube and a less flash looking cabinet. This set has a width problem at the moment, but hopefully that will be sorted out soon. This set was purchased from an excellent chap called Mike from Crewe. Thanks Mike - it's an excellent set. 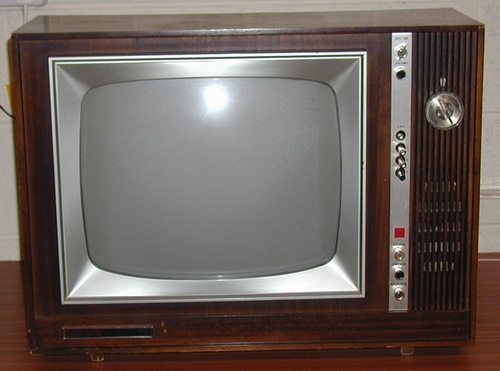 This picture is of another first-generation colour set. It is a GEC dual standard set, model 2030. For some unknown reason, these (and the 19" versions) suffered from the VHF selector spindle snapping. In fact this particular set, and another 19" GEC, both have broken spindles. Luckily, they use the same tuners as their mono cousins. This set was very kindly donated by Steve Pendlebury from Bolton. If anyone thinks they might have some legs for this set that they would like to sell, I would be over the moon.:-) 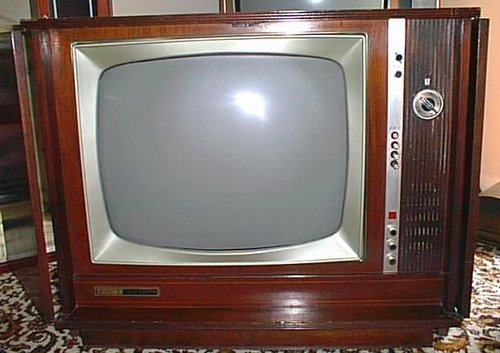 This picture is of a GEC model C2115. This particular set was donated by an excellent chap called Ian from a town near Brighton and works extremely well. Many thanks Ian. 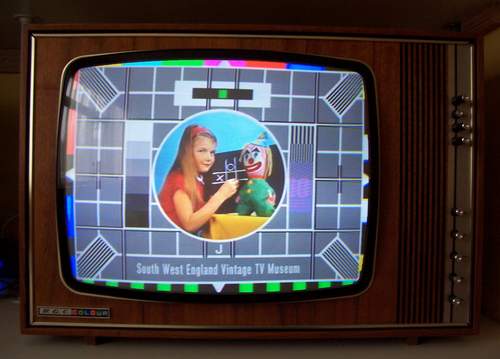 Next, a Granada badged ex-rental set.This set uses the Thorn 2000 chassis. The Thorn 2000 was a genuine British world-beater, being the first fully transistorised colour television in the world. Thorn sets were often used for rental, and rebadged with various brands for companies such as Granada, DER etc. 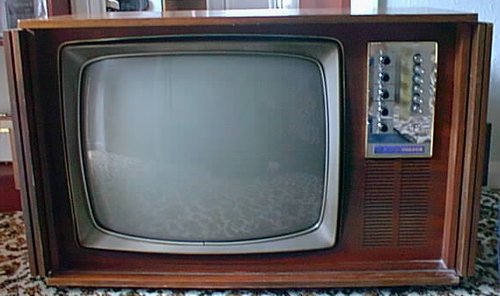 The next set is the most common version of the Thorn 2000 set. It looks very similar to the Granada badged set above, but it is a "HMV 2700 Colourmaster." The "Colourmaster" name was used on a large number of different HMV models. This set came from a great chap called Keith from Bradford. Many thanks Keith - it's a cracking set. :-) 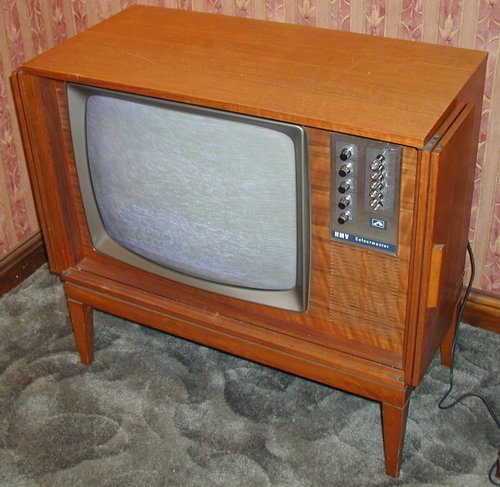 This is a KB single standard colour set. It uses the KB / ITT CVC2 chassis which was a development of the earlier (and much rarer) dual-standard CVC1 chassis (See the colour TV gallery page 2 for a CVC1.) When new, one of the main "attractions" that the set boasted was that it was "Hand wired." Certainly it didn't have any printed circuit boards in it, but whether that was a benefit or not is perhaps open to question... 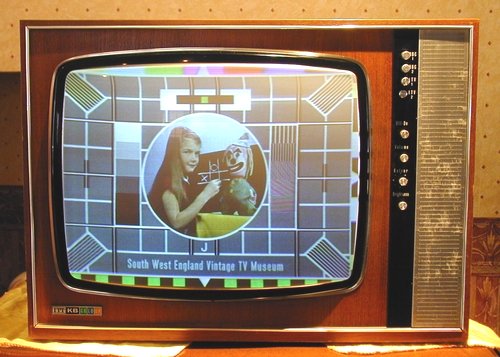 This next set is a Murphy CV2510; it came from an excellent chap whose name, somewhat embarrassingly I can't remember. When I first had this set it had been fitted with a Rank A823 chassis, suitably modified to work with the different multi-band tuner. To return it to original spec I fished around in my loft and found a suitable chassis and converted it back. This particular set has the later "MK3" timebase chassis with a quadrupler although it still retains the shunt stabilizer. The decoders in these hybrid sets never seemed terribly good to me - They were capable of producing a good picture as long as they were set up exactly right but any deviation from 100% accuracy would invariably cause no-colour problems or colour that would come-and-go depending on the scene. To my eyes, the circuit never really seemed to have enough "puff" to overcome the colour-killer. As an aside, apparently Murphy CV2510s and the identical Bush CTV25s had a bit of a reputation for catching on fire, allegedly being known in the trade as "The Burning Bush". However, whether this is actually true or just a good story I really couldn't say. :-)

Here's a picture of a 1964 Philips colour set model 21KX102A that was donated by a good pal of mine called Tony from Staffordshire. From what I can gather, these TVs were originally designed in 1963 for Canada as 525-line NTSC sets. Later on they had a solid-state PAL decoder added to them and were converted to 625-lines for Europe. There were a few different models destined for different countries, some with only VHF tuners and some with VHF and UHF. Some models had motorised controls and some didn't. The 21KX102A was the model meant for the UK as a kind-of experimental device for colleges, universities and TV companies wishing to experiment with colour TV a few years before the official start of UK colour. This particular set has only recently been made to work reliably thanks to the help of a few pals (Keith Parker, Mike Barker, Tony Price). Thanks Keith, Mike and Tony for your very kind assistance and good ideas. 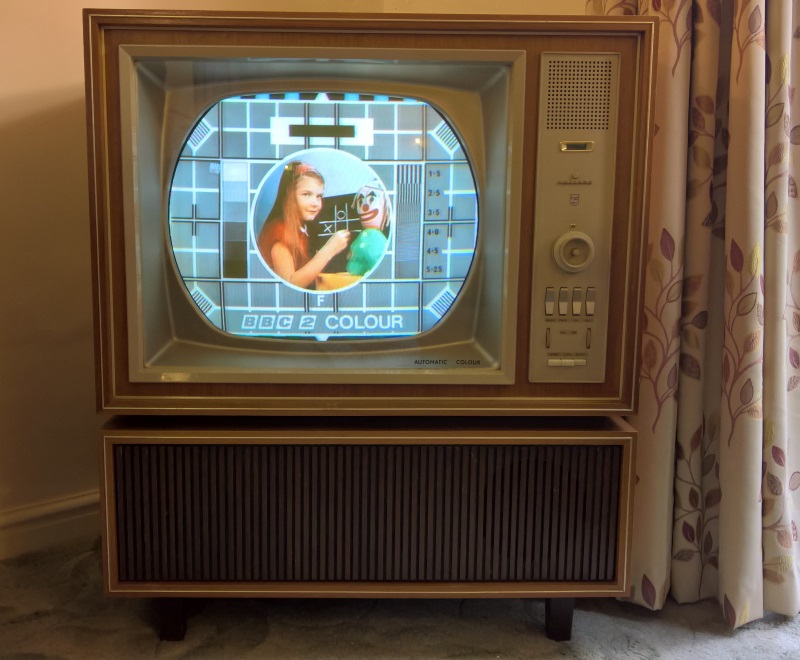 Next is a Philips Dual Standard TV, model number G25K500. This first-generation colour set was manufactured in July 1967 in time for the official start of colour in December 1967. This set uses the Philips G6 chassis, and is switchable between 405 lines monochrome and 625 lines colour. The set was donated by a very kind chap called Mike from Dorchester. As one of the first ever colour TV's in the UK, these sets were somewhat difficult to work on. All the panels were hard wired to each other, and access to components buried deep in the set was rather awkward. However, when set up correctly, the Philips G6 chassis had arguably one of the best pictures of any set of its time. There were other variations of this set (G25K501, G25K502 and G25K503) which had different cabinet styles. These sets were also to be found wearing "Stella" badges with the model number Stella ST2500. 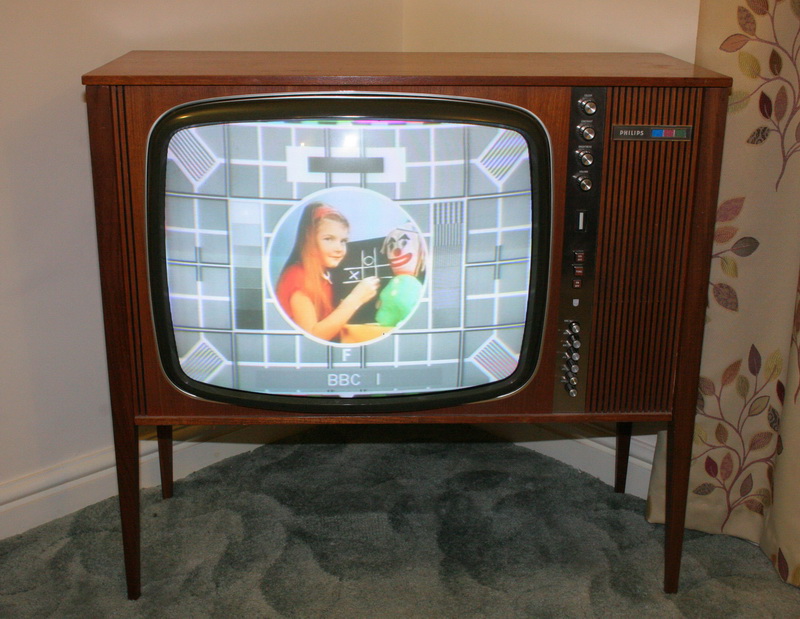 The next picture is of another Philips set; this time model G22K511, which uses a single standard version of the G6 chassis. These Philips sets were less complicated than their dual-standard cousins. Not only did they have all the system switching removed, the sets had less protection circuitry too as it was felt that the original G6 protection was a little over the top. This particular set needs a line output transformer to make it work. If anyone has one they would like to sell me, I would be extremely pleased. :-) 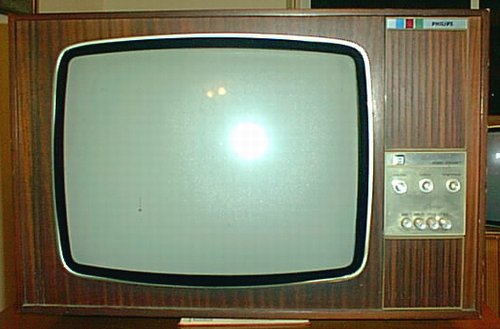 Next, a Philips S26K497. This set was a continentally designed hybrid (valve / transistor) utilising the Philips K70 chassis that briefly replaced the British G6. Contrary to what I said on this page previously, there was in fact a 22-inch version of the K70, however I have never seen one. (Does anyone have a picture?) Anyway... The set employs a peculiar line output stage which has a PL504 and a PL509 working together (In some sets, 2 PL509's were employed.) It also has a GY501 and PD500 (EHT rectifier and shunt stabiliser.) This particular set was very kindly donated by an excellent chap called Max from Cambridge. See Steve Pendlebury's site for another example of this type of set. (See the Links page.) 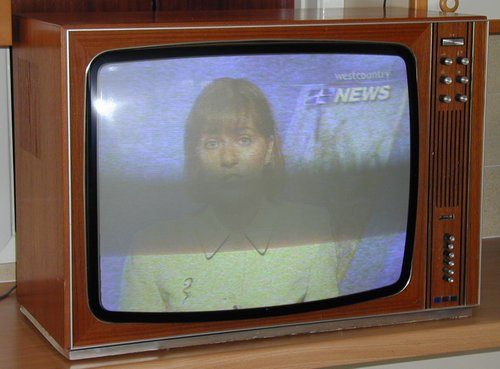 Here is the original Pye Dual-Standard colour set model CT70. It is identical in all but cabinet colour to the rebadged Ekco model (further up this page) This set came from an excellent chap called Graham Gosling in East Anglia. Thanks Graham. :-) 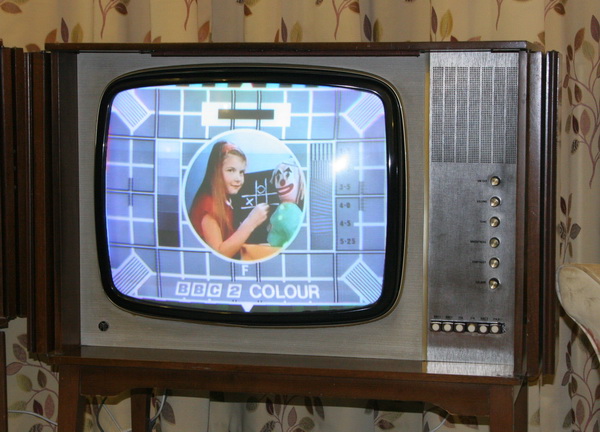 The next picture is of a slightly tatty looking Pye CT152. It needed all sorts of bits and bobs doing to it to get it working, but now it has a cracking picture and the tube is superb too... It's a shame about the veneer missing from the front of the cabinet. :-( This set uses the Pye 691 chassis with the big metal line timebase unit and the decoder with the chunky delay line. 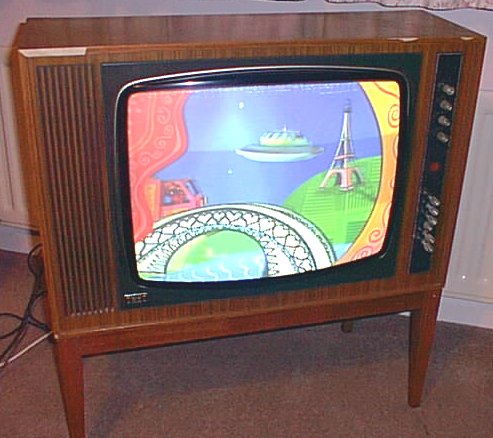 This next telly is a Pye CT203/1. It was made in 1974 and uses the Pye 697 Chassis. The "/1" on the end of the number meant that it uses the printed-circuit version of the line output / power supply panel. This basic chassis was used on all Pye colour sets from 1967 to 1974 and although much modified along the way, certain panels were still interchangeable between the first and the last versions of the chassis. 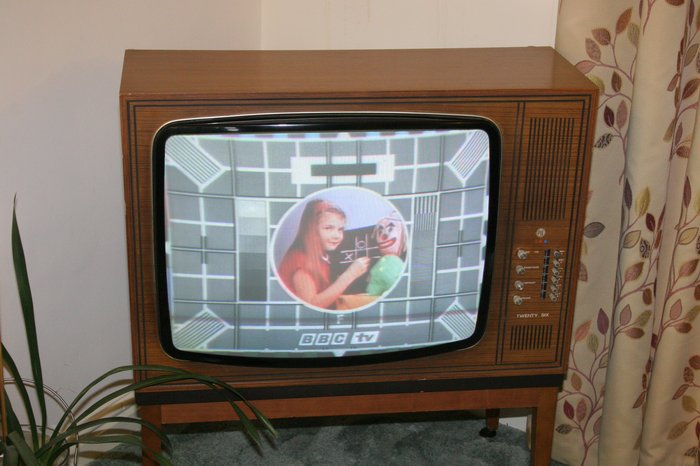 Go Back to The Vintage Television Page

Go Back to the TV Museum Main Page